The following is the breakdown

I am surprise by the low gearing ratio Frasers Centrepoint Trust has. As of 31st December 2016, gearing ratio stood at a level of 29.7% which consider low. SPH REIT has a gearing ratio of 25.7%. (My Personal Analysis of SPH REIT)

Mr Philip Eng Heng Nee serves as the Non-Executive Chairman and independent director of Frasers Centrepoint Asset Management. At the same time, he also holds directorship in several companies, including Ezra Holdings, mDR and The Hour Glass. Did someone just mention Ezra? (Note: Ezra has recently filed for Chapter 11 bankruptcy in the US).

Overall, the management is decent.

The Net Asset Value (“NAV”) as of 31st December 2016 is $1.93. Thus, Frasers Centrepoint Trust is currently trading above its NAV. 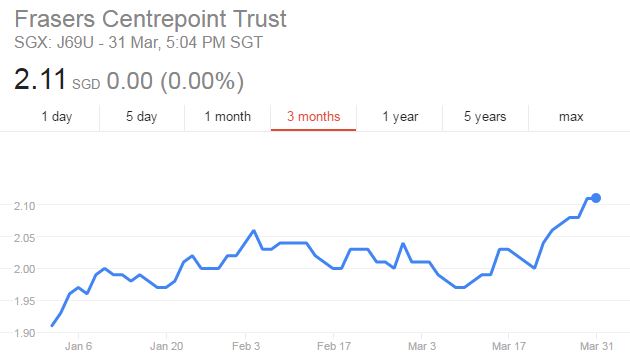 The enhancement is expected to be completed in September 2017. There will be links between Northpoint and Northpoint City where it indirectly connects the bus interchange which possibly can increase more shopper traffic to Northpoint.

Causeway Point being Frasers Centrepoint Trust’s largest asset makes up 52.8% of its Net Property Income. Shopper traffic should not be an issue as I remember this is everyone’s favorite mall in the Woodlands area. Causeway Point is well located beside Woodlands MRT station.

There is good track record of 10 years of consecutive DPU growth. Reputation is the strength but it is still a fact the REIT is also facing current headwinds.

Frasers Centrepoint Trust was named the Runner-Up winner of the Most Transparent Company Award (REITs and Business Trusts Category) in the SIAS Investors’ Choice Awards 2016 for its outstanding efforts in Disclosure and Transparency standards. It all boils down to a good management.

Changi City Point only draws crowd during the weekdays. In evenings and at weekends, the mall is less crowded. This is due to the nature Changi City Point is located in Changi Business Park whereby surrounding it is all offices. The nearest neighbourhood estate is Simei and Tanah Merah.

Shopper traffic at Bedok Point is poor due to the fact that it located near Bedok Mall (owned by CapitaMall) which is a big threat as Bedok Mall is linked to the MRT station and bus interchange. Having visited Bedok Point last few months, I noticed it is mainly occupied by a few eateries and an electronics retail store. The more reputable brands being Starbucks and Harvey Norman.

In current headwinds, the pace of decline of suburban rents quickened, from 1 per cent quarter-on-quarter in the first quarter to 2 per cent in the fourth quarter.